My journey to London began with a thought literally 2 weeks before I took flight. When I realized that I had 13 days off from work for the holidays, I decided that I wanted to spend some of that time traveling. Initially, I thought about Australia, but London appealed to me to most and I don’t regret the decision. Traveling alone was never a concern for me as I have taken the past few months doing new things and meeting new people in various areas. As I planned, the excitement continued to grow.

I spent numerous hours researching before going to London. This included the obvious; flights, places to stay, touring options, Euros, how to get around the city, and more importantly, the weather. Living in Phoenix, Arizona, we are many times still wearing short sleeves and sandals in the winter. However, in London, the temperature can get to the single digits in Celsius at night and it can rain at any moment. Because of the intermittent rain, the recommendation was to wear a rain resistant coat with a hood which I had to purchase before leaving.

Instead of staying at a hotel, I took the suggestion of a friend to stay at an Air BnB.  I was hesitant at first, but after reading the review on several places and looking at the location to attractions, I decided on one and made a booking. I then started looking at “Things to Do in London” and booked tickets to see the Dreamgirls Broadway show. At the recommendation of a friend, I also scheduled a day trip via train to Paris, France! After booking my room, identifying landmarks I wanted to see, and booking the show and train ride, I finally took time to book my flight. Yes, I scheduled my fight after I made the other arrangements. Since there is no public transportation in London on Christmas day, I scheduled for a personal car for round-trip transportation on the day of arrival and departure.

Packing was an adventure within itself as I was only taking a carry-on for the vacation. After finally finishing packing the night before, it was time to take flight. I flew from Phoenix to Charlotte, NC and had a 40 minute connection time before the flight to London was to leave. This meant not wasting time to get from one terminal to the next. I had been pre-warned that international flights start boarding earlier than domestic flights and I wasn’t taking any chances. After I received my boarding pass, I got settled in my seat and was preparing for the 9-hour flight. Shortly after, a flight attendant came to me and asked “Are you Ms. Debro? We have a seat for you in first class if you would like to move.” I was out of my seatbelt and ready to move before he could finish his statement. Of course, I didn’t mind being moved to first class. I had not flown first class on an international flight and this was an experience within itself.

Day 1: I arrived in London on Christmas day and was met by the AirBnB host, given a brief introduction to the home and we left for Christmas service at their church. While this was my first experience with an AirBnB, I was made to feel very comfortable in their home. After church, I took a well needed nap before joining the family for their Christmas celebration of dinner, year in review of things they accomplished, a song, and prayer. Being a part of their family tradition allowed me to experience Christmas in a different way. There was no gift exchange, but a celebration of their family and an exchange of love and compassion for God and one another.

Day 2: I didn’t wake up until noon which was not intended as it caused a delay in my plan to be out in the city early to see as many sites as I could. Before leaving for London I had done a lot of research which included apps to use to get around the city. I downloaded the City Mapper App which was great to help me navigate to the different locations I wanted to see. Using this app provided me with options for getting around via walking, bus, tube (subway), Uber or taxi. Once I got to the town center via bus, I walked throughout the city to visit The London Bridge, St. Paul’s Cathedral, The London Eye, and Buckingham Palace. All of these were awe inspiring sites to visit and enjoy. After eating dinner, I took a deep breath to ride the tube for the second time in my life. The first time I was with a friend in New York who knows the ins-and-outs of riding the tube. However, using the City Mapper App, it provided me with walking directions to the Underground and which train to ride. #CityMapper Day 3: Not wanting to be late for the train, I took an Uber to the Euro train station. After checking in and receiving my boarding ticket, I proceeded through security and listened attentively to boarding directions for Paris. There were several trains leaving at different times and I wanted to make sure that I got on the correct train.

Once I arrived in Paris, I realized that City Mapper would not work for their public transportation. So, I did what any other tourist would do in that moment; purchased a Hop On/Hop Off tour ticket. Although it was misting with rain, I chose to sit at the top of the tour bus with other passengers at different times to get a view of the city. A beautiful city it is! My main goal was to get to the Eiffel Tower. As we were driving to the Eiffel Tower, I prayed that it would stop raining and God answered my prayer. Notre Dame was the last stop before we reached the absolutely amazing Eiffel Tower and it wasn’t raining anymore! It is definitely a landmark to have on your list of things to visit. The view from near and far is one you will never forget. After taking a few pictures, I went got on the tour boat that would take us along the water to see sights from a different point of view. I sat with amazement as I watched the beauty of the city and continued to thank God for allowing me to be in that place at that moment. As the boat ride came to an end and we were walking off, the wind began to pick up. I was able to take one more picture and the rain began again. With the wind blowing as hard as it was, my poor umbrella didn’t stand a chance and was quickly thrown away. Day 4: By now, I’ve become more comfortable with using the City Mapper App and riding the tube and on this day I rode to the Camden Market and found my way to the goods made and sold by locals. After purchasing a few items and conversing with locals and getting additional tips for places to visit, I made my way back to Buckingham Palace to see it in the daylight. From there, it was time to go see Dream Girls Broadway show. Oh, this Broadway show was more than I could’ve expected. Sitting in the second row, my eyes were very attentive to everything that was happening on stage and I was emotionally moved with laughter and tears. The actors and actresses were captivating and their singing touched me in a way that I cannot explain. Once the tears started, there didn’t seem to be an end to them. From Moya Angela “Effie White” singing that all famous “And I am telling you, I’m not going” to Tosh Wanogho-Maud finishing his song on his knees and with eye contact with me, to Delroy Brown wishing me a Merry Christmas as the curtains closed, I wouldn’t trade the experience for anything. I left the theatre filled with an exuberant joy and continue to have feelings of happiness leap inside of me as I think about everything that happened. I am very humbled once again that God would allow me to be in that place at that moment. 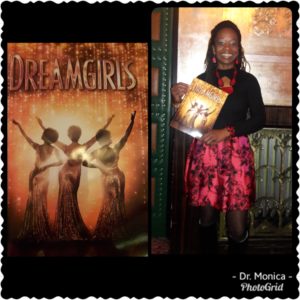 After leaving the theater, I found myself walking in circles around London as I was trying to find Westminster station to catch the tube back to Oval station. I had plans to visit with the family I was staying with before going back out for the evening. As a result of not being able to find the tube, I went back over to the Eye of London and explored the different vendor locations, had a cup of cocoa and dinner. I was wondering around because somehow my battery drained while in the theatre. Although I knew which station to get to, I was unaware of the one less than 2 blocks from Savoy theatre that would also take me to my destination. Riding this tube would be the final time I see Idris Elba in London on this vacation. While I would have loved to meet him in person (no judging) the only time I saw him was walking to catch the tube or as his picture was passing by on the bus. Of course I wasn’t expecting him to be in a tourist area, but hey when in London, keep your eyes open for the unexpected!

London, I will be back!!